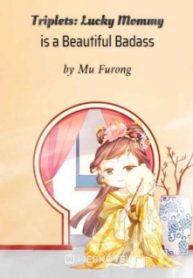 Triplets: Lucky Mommy is a Beautiful Badass Average 4.5 / 5 out of 2

A huge scandal rocked the Qi family. Young Miss Qi gave birth to triplets before she was married! After being driven out of the Qi family, Young Miss Qi lived with her three children, but she became unbelievably lucky. Good news never stopped coming! She would find money on the road. Handsome hunks fell for her. She also had help from powerful people. Those who had looked down upon her were envious of her good luck. Not only were the three children intelligent and cute, but they also hunted for prospective husbands for their mother! The matchmakers fought among themselves to find a match for the woman, and her house could not fit all those suitors! When someone from the Imperial Capital came and saw the three children, they gasped. “Eh? Why do these children look like the master of the family…?” Why would a young lady from a rural village have any relation with an official from the capital?

With an extremely attractive story plot, you will surely be curious as to how many words are in the average novel. This novel is still being finalized by the author. Stay tuned to the end.

I Turned Wild After Being Doted On By The Big Bosses

If the Deep Sea Forgets You

how many words are in the average novel