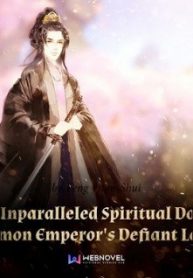 She roused from a pool of blood, vowing to exact retribution on those who had harmed her. She slapped her despicable father and smacked his wicked concubinesShe trampled on a two-faced girl who acted innocent but had a malicious heart, and pointed her sword towards the heartless man who was unworthy of her love. Countless beasts trembled in front of her cute pet, and her divine artifact intimidated even the Ninth Heaven. As soon as her Elixir Furnace was lit up, the world came to kneel before her. Between him and her, it all started with fair trade. Yet, the handsome demon ended up being obsessed with her.“Lay an egg for me, and I’ll promise you a peaceful life in any of the three realms!” He wrapped himself around her eagerly.“Leave me alone, and I’ll grant you a long life till eternity!” She pushed him away with a defiant laugh. The plot of this novel is quite similar to the Five Nights at Freddy’s: The Silver Eyes novel.

Reborn: The Godfather Has Fallen For Me

Sovereign of the Karmic System