The National Sweetheart Livestreamer Is A Pro! 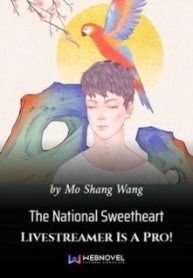 The handsome, skilled newbie live streamer, Ji Zhiyao, has a dream.“One day, I want to become the most famous crosstalk actor amongst the live streamers.”Later on, this dream is forgotten by him and secretly becomes another.“I want to overthrow Fi-god! I want to become Mix’s new team dictator!” The rich and aloof idol of the eSports scene, Mo Huaifeng, also has a dream.“Two years later, Mix will definitely make it into the International League.”Soon after, subtle changes happen to this dream.“I want to make it into the International League with Ji Zhiyao and after winning, I will f**k him on Livestream.” Livestreamer to eSports pro, Captain to boyfriend, will their dreams come true? The novel is the same genre as the March graphic novel.