Rebirth As a Fatuous and Self-indulgent Ruler 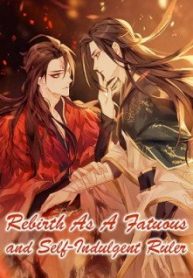 Long Xiaoyuan lived a total of 26 years but he suffered from severe heart disease. When his family wanted him to get betrothed at the age of 20, he turned it down because he realized he didn’t like women. At home, bored, he read many novels, but he chose a Chinese visual novel called The Empress’s Way. The book was written from the queen’s point of view, which was a little odd, and it fascinated him.
But unfortunately, he passed away at the age of 26 after reading that novel. But a miracle happened, he was a rebirth. He doesn’t know whether to be happy or sad. Glad to be resurrected in a healthy body and show off her martial arts skills. Sad because even though he has been reborn, he has time travel into the book he just finished reading. He suddenly found that his soul was in the body of a fatuous and self-indulgent emperor. This fatuous emperor put sycophants in important positions while executed the faithful and the upright! This merciless emperor married the son of a general and kept torturing him! How could he be reborn as such a person? The empress was pretty handsome and smart. Since the former soul of the emperor didn’t cherish such an excellent man, Long Xiaoyuan would love the guy and save himself by the way!

Back Then, I Adored You

Wife is Fierce, Don’t Mess With Her!

I Don’t Want You To Be Responsible!