Living With a Temperamental Adonis: 99 Proclamations of Love 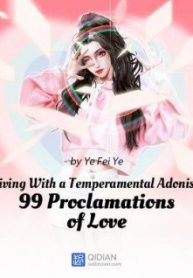 When he stayed at her home for one night, he took her body in a drunken stupor. From then on, he had been a constant fixture in her life. How adamant he was in forcing a marriage was how adamant she demanded a divorce. “I’m not staying married to you! I’m not staying married to you! I’m not staying married to you!” After she repeated such an important proclamation three times, he finally tossed her the divorce paper. She thought she had finally escaped him alas… After the divorce, he still snuck into her room every night… Finally losing her patience, she yelled, “We are already divorced!” He glanced at her and set down the divorce paper before her. On it, it was written clearly: After the divorce, the car is hers, the house is hers, the company is hers, their child is hers, he… is also hers? The novel is different from the Alex cross (novel series) books because this novel talks about romance, supernatural types.