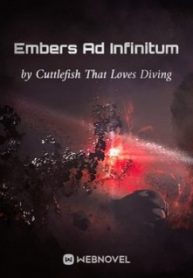 You’re reading Embers Ad Infinitum, a wonderful manhua. If you’ve read Manga and want to find something new from the supernatural genre like this novel, you should try The Outsider (King novel). The Outsider is Stephen King’s take on the “double”, an idea that has been covered many times, in many different ways in fiction.

In this latest work by Lord of the Mysteries author, Cuttlefish That Loves Diving, be prepared for a well-thought out and detailed apocalyptic, cyberpunk world with a setting superseding Lord of the Mysteries! Our protagonist, Shang Jianyao, is crazy—literally crazy, at least that’s what the doctors said. Living in a huge, underground building of Pangu Biology, one of the few remaining factions in this apocalyptic wasteland known as the Ashlands, he acts in unfathomable ways that’s head-scratching, comical, and shrewd. So is he really crazy? Probably. He has a grand dream: to save all of humanity. Intricately tied to this dream is something everyone in the Ashlands believes in: Deep in a particular ruin buried away by danger and famine, a path leading to a new world awaits. To step into the new world, one only needs to find a special key and open that certain door. There, the land is bountiful, as if milk and honey flows freely. The sunlight is dazzling, as if all coldness and darkness are washed away. The people will no longer have to face desolation, monsters, infections, mutations, and all kinds of dangers. There, children are joyous, adults are happy, everything is fine as they are supposed to be. Every Antiquarian, Ruin Hunter, and Historian roaming the Ashlands knows: That’s the New World.

The Princess Consort Has A Lethal Destiny

What do you mean my cute disciples are Yanderes?